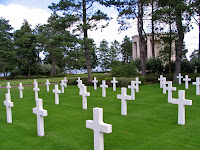 Melinda Starnes sent me an excellent piece by Herbert London from the Wall Street Jounral, June 4, 2009, The Meaning of Bloody Omaha: On D-Day, the U.S. saved Europe from itself. If you have access to it, be sure to check it out.

Originally, D-Day was to take place on June 5, but had to be postponed due to bad weather. Gen. Eisenhower made the decision to go ahead on June 6. The night before, Winston Churchill said to his wife, "Clemmie, do you realize that 20,000 men could be dead by the time we get up in the morning." Although losses were not quite as bad as Churchill feared, they were nonetheless horrific, especially on Omaha Beach.
When I have visited the American Cemetery in Normandy, and when I stood on Omaha Beach, I felt that I was standing on sacred ground for the price of freedom was paid in blood. As we sit here in comfort and safety in the best country in the world, stop to remember that 65 years ago right this minute there were Americans crammed onto ships out in the English Channel waiting for the invasion to get underway. Think about the 82nd and 101st Airborne Divisions who were to shortly parachute into Normandy. Remember Sainte Mere-Eglise where the Germans shot so many of our troops as they drifted down into the town square.
On Saturday morning, pause to remember and be thankful for those brave young men in the Higgins landing craft who were about to hit the beaches. Let us never forget the sacrifices of American troops, and as we approach this 65th anniversary of June 6, 1944, especially remember Omaha, the bloodiest beach.
God bless our World War II veterans, and may future generations always remember this day.
Posted by Martha Fielder at 5:53 PM